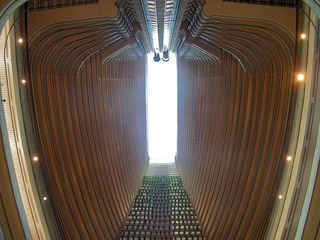 Briefly, on a personal level, the conference went well for me. My presentation with Ian Bogost and Samantha Blackmon was well-received. I had an opportunity to have conversations with a number of interesting people for the first time, including Ian, LIz Losh, Cynthia Haynes, and Jan Holmevik. And, of course, catching up with long-time friends and colleagues. As we know, these are the primary reasons we attend conferences.

Of course there are other matters to address. I checked out five sessions other than my own. The best was certainly "Being with Others" with Matt Levy, Scot Barnett, Amanda Booher, Geoff Sirc, and Cynthia Haynes. It was a wide-ranging panel, not easily summarized, but the common theme was investigating how our non-human relations shape rhetorical practice. Scot's work deals with object-oriented rhetoric, though the others on the panel do not. But, as such, I thought the panel did suggest how object-oriented rhetoric might have conservational partners in rhetoric and composition. The "Writing Text, Writing Code, Writing Connections" panel with Julie Meloni, Annette Vee, and Brian Ballentine was also interesting in its investigation of critical code studies and the role of programming literacy in the humanities. I think it demonstrated the way that programmers and humanists continue to talk past one another. Certainly there is valuable work to be done in the study of code, but, as I think this panel suggested, the conventional methods of cultural critique cannot be simply imposed on code. (One might say they shouldn't be simply imposed on culture either, but that's another story.) The panels on Texas and Florida were also worthwhile takes on the theme of contesting boundaries. I think they can be part of a way that we can bring rhetoric out into the world to investigate its role in place, space, networks, topologies, etc. I was particularly interested in Jenny Edbauer Rice's arguments for the perception of classical rhetoric as a living practice rather than some staid historical foundation that rhetoric needs to outgrow.

As I moved among these panels, I noticed similar faces in the audience. I certainly had a sense of participating in a mini-conference within a larger conference. I wonder to what extent everyone experiences the conference in this way. I've been to the last five C's but only 3 between 96 (my first) and 06. In my recent experience, I have found a community within C's. As you might guess, that community is some intersection of theory and digital rhetoric. I always try to see one or two things outside that community (and obviously I can't see everyone, every year, in that community), but honestly I am often disenchanted by my forays. In those explorations, I recognize myself as a significant outlier at C's. I think the only word I can use to describe the major sessions is "quizzical." I suppose it is like listening to speeches from the Democratic National Convention. I prefer them to the other option, but I don't see myself as really being addressed. But then I wonder how common that experience is. If you go to a lot of panels in the "Teaching Writing and Rhetoric" or "Writing Program" categories, do you feel like an outsider? If you come to my panel by accident, do you just say "that was weird" and shrug it off or does it make you wonder about your place in the discipline? In other words, is the discipline largely fragmented or is there a significant central chunk with a few outlier communities? I'm not really sure but probably it's the latter.

Despite my personal enjoyment of the conference, there was a strange affect for me. Perhaps it was the space of downtown Atlanta, which is sad and lifeless. I lived in Atlanta for two years in the late nineties, and I actually like the city, but then I never once ventured into the downtown area. No reason to go there, unless your a banker (or apparently a conference attendee). Anyway, the Marriott Marquis is built like some stone temple pilot's spacecraft or a David Bowie 70s space opera. It struck me as a continual reminder of a failing, unsustainable futurism. Indeed, much of Atlanta with its gridlocked corporate car culture reminds one of such.

Given this, I wonder if CCCC ought not to adopt a theme that asks "Is writing sustainable?" Though really my question is whether what we do, as a discipline, is sustainable. And in my view, I fear that we are sustainable on several levels. 1) Obviously the adjunct labor thing isn't sustainable. Sure we've been doing it for decades, but we've been driving cars for decades too. I think both have a similar lifespan. 2) Our teaching practices are not sustainable in the context of digital media. 3) Our inward facing research agendas and scholarly practices are not sustainable. Witness what is going on around us in the humanities. When we keep asking the same questions, reaching the same conclusions, and speaking to the same audiences what impact are we having. I would point out all these concerns apply equally to those within my outlier community as they do to those in the mainstream, though it is undoubtedly the intertia of the mainstream that is my primary concern. How can we shed that momentum enough to move at an angle?

I do think some of the panels I saw were introducing new kinds of rhetorical concerns. However they are speaking to an audience that is already open to such kinds of thinking. They are not the mainstream audience that responds, at best, by saying "ok that was interesting, but how does it help me reduce the number of comma splices in my students papers or catch plagiarism or make my workload a little lighter?" Nor is it that other significant audience that wants to ask "how does that scholarship help me achieve my pre-existing political agenda?" These are the big audiences that need to be addressed at CCCC. It's not unreasonable to be focused on classroom issues, but classroom issues cannot be resolved within the framework of received notions of writing. It just won't work. Similarly, there are many political issues with which to be concerned. And scholarship, like nearly every act of our lives, has a political dimension. However, politics and scholarship are not synonymous. One would imagine this is more clear than it actually appears to be in the presentations one sees. In fact, even broaching such a subject is likely to get one skewered, at least in some circles. However, it has always struck me that politics begins with some conviction about what the results of a particular practice should be, if not must be; politics must also rest upon some certainty about the world. Research, on the other hand, cannot operate in such ways. In research one must be open to changing one's mind in a way that is not available to the political agent.

Again, I am reminded of Pat Belanoff's observation at SUNY COW last month that the themes of that confereance, going back 20+ years are all still relevant. In other words, we've been asking many of the same questions (and offered many of the same answers) for decades. Is that sustainable?